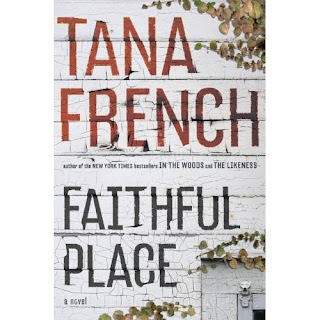 If you're a longtime follower of this blog, you may recall how much I loved Tana French's debut novel "In the Woods." If not, check out my review here.
I loved her second book, "The Likeness," which followed a character from the first book.
Her third novel, "Faithful Place," follows a character from the second book. This is Frank Mackey's story, and it begins some 22 years previously in Mackey's old Ireland neighborhood, Faithful Place. Frank and his secret girlfriend Rose Daley have planned to run away together. In the dead of night, mid-winter, Frank waits on a quiet street for Rose to join him. She never does.
Fast forward to the present, and Frank, now a head honcho for the Undercover Squad, is a divorced father of a little girl. The only family member he keeps in touch with calls him in a panic about a suitcase that construction builders have found in a crumbling building in the neighborhood where Frank grew up. The suitcase appears to belong to Rose Daley.
Frank reluctantly makes his way home, a place he hasn't returned to since that night Rose deserted him. When a body is found inside the same crumbling building, Frank realizes his history is about to be rewritten.
I love French's style of writing. Her characters are always intriguing and believeable. I enjoyed this book just as much as the previous two, but I had two main problems with "Faithful Place." First off, French uses a certain phrase over and over again, throughout the entire novel. In the United States, where we'd probably use the phrase "touche," French uses "fair play to you." I gave up counting how many times it is used. It took me right out of the story because I was so irritated.
WARNING: DON'T READ THIS PARAGRAPH IF YOU'RE WORRIED ABOUT SPOILERS!
Second, and more importantly, while I certainly liked the character of Frank Mackey, there was a major character flaw. Frank loathes his family. I get that. I've had moments like that myself. He's avoided them for 22 years, and when he gets back, he falls right back into old patterns. I get that, too. Family has a way of bringing out the worst in you. Really. But in Frank's case, he refuses to see how maybe two of his siblings could have had it worse than him. Anytime Frank's brother Shay talks about how bad it had been for him, Frank sneers and goads him. He flat-out doesn't accept that his older brother and sister had protected him from their father the best they could. This, in part, is a tool for French in setting up the big ending. However, for me, it made Frank less likeable.
SAFE TO READ AGAIN!
I didn't find the ending a surprise, but I did enjoy the book. I really, really hope French takes readers back to "In the Woods" and Rob's story. That mystery is unfinished, and she could do so much more with it. She's a fantastic writer, and though I wouldn't rave about "Faithful Place," I'd definitely read anything else she publishes.
3.75 stars
P.S. Dear authors, stop killing off favorite characters! It reeks of desperation and lack of imagination.
Posted by April at 9:11 AM 4 comments: